If non-white immigration to Europe is not halted, all of Western Europe will have a non-white majority population by 2090 at the latest. Essentially what political correct fascism requires everyone to accept is that: Africa is for Africans; Asia is for Asians, Middle East is for Arabs, and white countries is for everybody.

In the absence of a global European awakening of Europeans and Americans, to the politics of demographics, the ‘African White Refugees’ reality shall be their children’s future.

2. Europe commits Ethno-Cultural Suicide: Africa for Africans, Asia for Asians, and Europe for Everybody?: 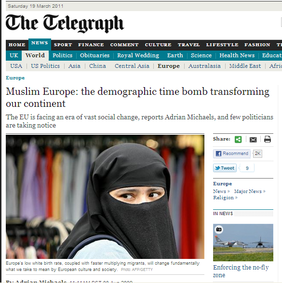 Dr. Frank Ellis, Former Professor of Russian and Slavonic Studies at Leeds Univ. UK reviews Dr. Sarrazin’s epic Germany Consigns Itself to Oblivion, with additional analysis, commentary and selected translations. Dr. Ellis states that: “Concerns over the magnitude and speed of population growth, as well as the racial and cultural changes brought about by mass immigration are nothing new. What is new is the manner in which the political establishments of virtually all Western states have abandoned, with complete disregard for the legitimate fears and well being of their own indigenous populations, any form of immigration controls.

Until quite recently, this mass movement of the unemployed and unemployable from the slums of the Middle East, Africa and the Indian sub-continent, with a fair proportion of actual and would-be terrorists among them, used to be justified by the obviously preposterous claim that the white indigenous populations of northern Europe would somehow benefit from the influx of millions of foreigners into their countries. Indeed, we were told - though not so much these days - that immigrants were bearers of the remarkable gift of diversity; that their presence enriched us. In common with other Western states, Germany has suffered from the combination of a duplicitous and negligent political class, one which has relentlessly harried its citizens to accept what they instinctively feel and know to be wrong, and from waves of immigrants who, the evidence quite clearly shows, have no intention of integrating.

Third World immigrants are attracted to Germany not by abstract concepts of free speech, the rule of law, liberal democracy and personal freedom but by the higher standard of living they can enjoy at the expense of the German taxpayer.” The pressure on the Germans to conform to the UN-sponsored ideology of multiculturalism has been immense. Normal, emotional and rational pride in, and commitment to, their country of origin, their fatherland, has been labelled as manifestations of Neo-Nazi tendencies. ” 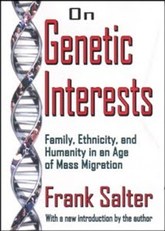 The University of Tartu Estonia Conference’s conclusions that ethnicity is the basis for democracy and freedom, not its threat, are explored. Arguments were made that “it is the suppression of ethnic mentality that creates problems and not ethnic mentality or nationalism in and of itself” as asserted by liberal multi-culturalists.

The professors argued that without a strong sense of ethnic identification, a society often lacks the social cohesion that democracy and individual freedom require.

It asks whether the Failure of Multi-Culturalism in Europe, including Europe’s demographic decline, should motivate European Union States to invite their Blood Relatives home from the Diaspora; instead of consigning Europe to oblivion by means of foreign immigration.

It also provides a brief Historical and Current Reality overview of Jus and Lex Sanguini, and Right of Return laws and their current application to various European countries, as a contribution, or not to Principles of Cultural and Ethno Homogeneity. 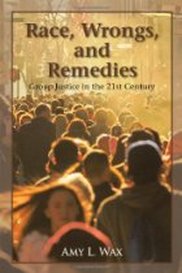 The work of Robert Mundheim Professor of Law, Amy Wax’s argument in Race, Wrongs and Remedies: Group Justice in the 21st Century are explored. Her argument that black culture is radically dysfunctional as a result of the educational, criminal, marriage and procreation choices that blacks are making. She argues that black people make personal decisions that negatively affect the group, but complain that the group is lagging behind, due to others making the exact same decisions. Instead of blaming ‘racism’ these individuals should look at their own individual and group-decision making, because they are doing it to themselves. She concludes that white culture is superior as a result of its members making better decisions in favour of education, marriage, refraining from procreation for small committed nurturing families, etc.

Nicolai Sennels, the Danish psychologist author of Among Criminal Muslims. Experiences of a psychologist in the municipality of Copenhagen, argues in Harmful myths of immigration, that the myth that there are no differences between immigrants from different cultures and ethnicities is a lie. Certain immigrants from certain cultures are far more able and willing to integrate, due to similarity of culture, beliefs and values. Muslim cultures have hugely different value systems and beliefs, in regards to ideas about authority and aggression, etc; which make it impossible for them to integrate into Western societies with opposite value systems. The second myths is that immigrant crime is caused by social problems, when the truth is that it a result of cultural beliefs. Thirdly, that religious extremism is only found in narrow circles is a severe mistake. Fourthly that cultural and religious factors are not causal factors for Muslims poor social and economic realities.

Both Prof. Wax and Sennels clearly detail how and why Multiculturalism is Impossible with Cultures whose values are considered dysfunctional by European standards. Sennels includes suggestions for an EU Moratorium on Muslim Immigration and Voluntary Repatriation. 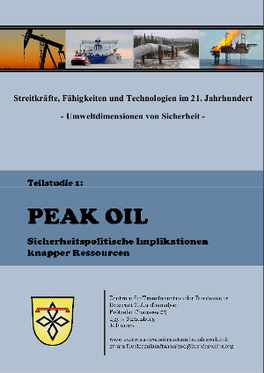 Matt Savinar’s Life After the Oil Crash (LATOC) details the evidence for his claims that “Civilization as we know it is coming to an end soon. This is not the wacky proclamation of a doomsday cult, apocalypse bible prophecy sect, or conspiracy theory society. Rather, it is the scientific conclusion of the best paid, most widely-respected geologists, physicists, bankers, and investors in the world.

These are rational, professional, conservative individuals who are absolutely terrified by a phenomenon known as global ‘Peak Oil.’” Western industrial civilisation is built on cheap oil, from its defence to its food production, medicine, and economy. Additionally the fiat-currency fractional reserve debt-based-economic growth financial system is entirely dependent on an ever-increasing amount of cheap oil. The absence of cheap oil will affect the financial system like dehydration affects a living body; by causing the debt pyramid to crash like a house of cards.

As Dmitry Orlov warns in Caution, White People, multi-ethnic societies are extremely fragile, and could quickly rupture in Peak Oil resource wars. These realities are confirmed by geopolitical military strategist Homer Lea, and Apartheids Friction Theory studies, among others. Consequently it is impossible to overestimate the International, Geopolitical, National, Ethnic, Cultural importance of amicably resolving Multi-Cultural Conflicts and the potential for Population Pressure Cultural Conflicts, prior to their aggravation by the socio-political and economic Friction Theory Resource War consequences of Peak Oil.

This reality is clearly clarified in three Military Peak Oil Reports (2 American and 1 German) released in 2010, warning that the ‘socio-political and economic consequences of Peak Oil will be severe’, of the “total collapse of the markets” and of serious political and economic crises, which could threaten the continued survival of democratic governments. Put differently Peak Oil’s consequences on among others transportation costs, the financial markets, and food production, shall significantly aggravate what Military genius and geo-political thinker Homer Lea qualified as the angles of convergence of States converging lines of self interest, in the Conflict over Scarce Resources. Simply put, multi-cultural conflict will experience Friction Theory on Steroids.

Quinn asserts that our culture takes food so much for granted that we have a hard time seeing the connection between the availability of food and population growth. 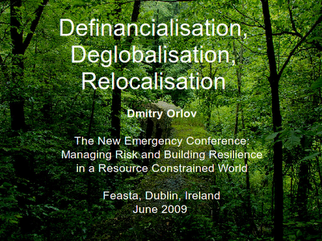 Dmitry Orlov argues for Definancialisation, Deglobalisation, Relocalisation, where communities plan for relocalised communities. Thomas E. Woods Jnr argues that decentralisation of power, contributes to conditions of liberty, in a multiplicity of competing jurisdictions. Jason Bradford argues that communities that implement relocalisation as a strategic response to Peak Oil’s ecological overshoot realities shall be better able to cope and survive, than those who do not.

Relocalized states and communities can better plan for a world of Energy Depletion, by rebuilding more balanced local economies that emphasise local food, energy and water systems, for local and regional political stability. 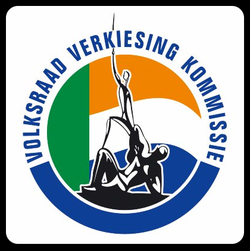 The Volksraad Verkiesing Kommissie (vvk.co.za), i.e. Volksraad Election Commission, is an administrative organisation setup to register Boers and Afrikaners to vote for a Committee to negotiate the establishment of a Boer-Afrikaner Volkstaat.

The VVK is setup in accordance with International Law, and Section 235 of the SA Constitution. Section 235 allows for a language and cultural group, who wish to secede in order to practice self-determination, to provide a Volksraad Committee with the required mandate to negotiate the community’s own ‘volkstaat’ with the National Goverment.

The Constitutional Overview of Section 235 in the SA Constitution, the right to Self Determination for “any community sharing a common cultural and language heritage, within a territorial entity in the Republic..”, is excerpted from Chapter 35: Minority Rights: Education, Culture, and Language, of The Bill of Rights Handbook, by Iain Currie.

The VVK’s reasoning and justification for its existence The Role and Task of the Volksraad Verkiesing Kommissie (VVK) / Electoral Commission for the Election of a Boer-Afrikaner People’s Assembly is also excerpted. For example “the right to self-determination can only be claimed and it's practical implementation only be negotiated on behalf of a people by a body they elected and mandated for this purpose in a free, fair and democratic election; to be held within such a people”.
[TRC Fraud: Just War Tradition]                                                     [TRC Fraud: Clash of Cultures Friction Theory]
[TRC Fraud: Population Policy Common Sense]      [Volkstaat Secession or Jus Sanguinis Right of Return]